The City of La Feria, incorporated as a city in 1915, is located in Deep South Texas in the area commonly called the Lower Rio Grande Valley (LRGV). La Feria is approximately 60 miles west of the Gulf of Mexico, on the western edge of Cameron County, bordered by Hidalgo County. 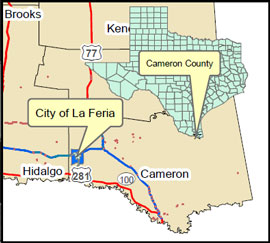 Geographically isolated from the rest of Texas and the U.S., the LRGV is a center of international commerce with five bridges to Mexico. The region is experiencing significant population growth and urbanization. The small but growing town of La Feria has 7,302 residents and encompasses approximately 2,800 acres.

This Community Planning Assistance Team (CPAT) project focused on some of the oldest parts of the city, a collection of aging neighborhoods, including La Feria's original town site. These traditional neighborhoods exemplify much of what "new urbanism" seeks to create — houses within walking distance of schools, stores, libraries, and parks.

However, an aging and deteriorating housing stock, under-developed commercial corridors, an incomplete sidewalk network and neglected park space are some of the mounting challenges that residents and city officials now face. La Feria's most recent (2007) comprehensive plan identifies much of the study area as "in transition."

The La Feria CPAT engaged the community in May 2013 with a visioning process and helped gauge where the city and its residents wanted that transition to take them.

The economy and people of the Valley are nearly one-hundred percent autodependent
for daily life — commuting to and from work and school, visiting with family and friends, and enjoying entertainment and recreation outlets. A couple of bus routes were introduced in recent years, but ridership is still considerably low.

May 24, 2013
The team met with city officials to answer questions and discuss in more detail the team's analysis and recommendations from the previous evening's presentation. A final report is forthcoming.

May 23, 2013
The team continued to work on preparing their final presentation throughout the day. La Feria residents, government officials and other stakeholders, many of which also attended the public input session on Tuesday, arrived eager to hear the team's analysis and recommendations. La Feria Mayor, Steve Brewer, provided an introduction followed by each of the team members who provided their analysis and recommendations.

May 22, 2013
Coming off of the successful public participation meeting the night before, the team conducted an all-day work session. Members of the public were invited to stop in to discuss ideas with the team as they worked.

May 21, 2013
The La Feria CPAT met with the planning and community development director and city manager in the morning, then toured the city and some of the surrounding areas. Following the tour, the team debriefed and prepared a short presentation and series of community engagement exercises to conduct with residents and other stakeholders during the first public meeting. Over 40 people attended and participated in discussions during the meeting.

Next, attendees broke up into three groups. Within each group, every person was directed to place three different-colored dots on a map of La Feria — each one representing a place in La Feria that: (a) they like the most; (b) they don't like; and (c) they would most like to change or improve. Group discussions followed to gain insights into each person's choices. Each group then shared with everyone a summary of their discussions. Team member, Philip Walker, AICP, closed with a quick summary of some of the common themes and ideas from the different breakout groups.

February 21, 2013
La Feria CPAT Team Leader, Bob Barber, FAICP, and APA project manager, Ryan Scherzinger, conducted a preliminary visit to La Feria. They toured the city and surrounding areas to get a first-hand look and determine what kinds of expertise will be needed when the full team returns later this spring. Barber and Scherzinger met with the project's primary community contact, Irene Szedlmayer, La Feria's Planning and Community Development Director. She organized meetings with the mayor, Steve Brewer, and the city manager, Sunny Philip. In the evening, they met with a small group of stakeholders to discuss the project and gather input on what they see as the city's next steps and current priorities.

La Feria News: "What Do You Like About La Feria? CPAT Community Meeting Explores the Good, the Bad and the Ugly"

Robert Barber is a founding Orion partner, having retired after 25 years of public service, most recently as director of planning for Hernando, Mississippi, from 1996 to 2012. He is currently president of the Mississippi Chapter of the American Planning Association, former chairman of APA's Chapter Presidents Council, and national board advisor of APA. He has been a member of the American Institute of Certified Planners since 1990. He was elected to the College of Fellows in 2010 and currently serves as its chairman. He is a former executive board member of the Memphis District Council of the Urban Land Institute and board member of the Mid-South Regional Design Center. Barber has served as Adjunct Professor of Planning in the Graduate School of Urban Affairs and Public Policy at the University of Memphis and is a lecturer in community planning for the Mississippi Municipal League's CMO program.

Andy Kalback is a talented designer with over 20 years of professional experience. His abilities include urban design, land planning, landscape architecture, illustration, and graphic communications. He has extensive experience in working with and assisting downtowns in the creation and communication of their future vision through master plans, design charrettes, and developmental strategies. His specific project involvement has included lead designer and project manager as well as sub-consultant to associated fellow professionals and disciplines. He has also developed plans for reusable environments, parks and open spaces, and environmentally sensitive areas. Professional assignments have taken place in numerous local and national locations as well as international locales including Brazil, Portugal, Korea, China, England, Poland, and the Caribbean.

Tripp Muldrow is an accomplished urban planner with experience covering a broad range of areas in the planning field. His particular talents lie in understanding how planning and urban design concepts apply to economic development policies and strategies. He has served on the faculty of the South Carolina Mayor's Institute for Community Design and has been guest lecturer at Clemson University, Pfeiffer University, and the South Carolina Planning Academy. Most recently, Muldrow was selected as part of an 18-person Kellogg Foundation Grant delegation to County Mayo, Ireland, to study sustainable tourism and community development. He serves as President-Elect of the South Carolina American Planning Association, a board member of Community Builders (formerly the SC Downtown Development Association), a commissioner for the Greenville Housing Authority, and on the Board.

Irayda Ruiz-Bode brings over 15 years of professional experience in all aspects of infrastructure planning and development and 10 years of experience in the formulation, implementation, and evaluation of programs and projects related to the sustainable management of infrastructure in Latin America and the U.S. Her experience includes providing technical assistance applying or adapting design standards to ensure environmental and technical quality of public infrastructure, land use planning and the improvement of the quality of life, sustainability investments, public services and institutional strengthening. She has also dedicated several years to teaching and research in urban issues. Throughout her career she has been part of multidisciplinary and multicultural teams, working in collaboration with public and private institutions and agencies of cooperation and bilateral and multilateral funding.

Phil Walker has over 25 years of experience in community planning. His public sector experience consists of serving as the executive director of the Pensacola (Florida) Downtown Improvement Board and city planning director for Natchez, Mississippi. He spent the past two years serving as the part-time Interim Director of the Two Rivers Company — Clarksville, Tennessee's downtown and riverfront revitalization entity. His private sector experience includes positions with Hintz-Nelessen Associates, Christopher Chadbourne and Associates, and Looney Ricks Kiss Architects. Since establishing The Walker Collaborative in 2002, he has led award-winning planning projects. He has consulted to the National Main Street Center and numerous local Main Street programs, and is a speaker at national and regional conferences. He is also an instructor with the University of North Alabama's continuing education program.