The town of Lyons, Colorado, located about 12 miles north of Boulder, was one of the places in northern Colorado most drastically affected during the historic floods of September 2013.

The landscape was severely altered as a result, particularly the Confluence neighborhood where the North and South Saint Vrain Rivers merge.

CPAT provided technical assistance to Lyons as it faced difficult decisions on how to redevelop in a way that supports the community's goals for sustainable neighborhood design, affordable housing, environmental preservation, resilience, and economic sustainability.

Living With the Saint Vrain

Because of damage to local and regional utilities and infrastructure, Lyons was cut off from its neighbors and left without power, telephone service, and potable water. The entire Town was forced to evacuate on September 14, 2013, and the first residents were not allowed to return until late October.

May 15, 2014
The team presented their week’s work at the high school, which included a formal presentation along with a poster display. Residents asked the team questions following the presentation, then gathered around different posters afterwards to discuss the team’s recommendations and findings.

May 12, 2014
The team's first day in Lyons included a meeting with members of the citizen-led, Recovery Advisory Committee, who provided an overall summary of the impacts from the flooding event of September 12, 2013, an update on the town's ongoing recovery efforts, and other background information. Lyons Town Administrator, Victoria Simonsen, led the team on a tour of the flood-damaged areas. Others on the tour included: the Town Housing Coordinator, Rosi Dennett, AICP; Michelle Allen, Chair of the Lyons Planning and Community Development Commission; and Anne Miller, AICP, Senior Planner with the Colorado Department of Local Affairs. After the tour, the team met further with Town staff, then discussed their observations from the day and began generating preliminary ideas. In the evening, the team sat in on an update to the Board of Trustees from one of the citizen-led Recovery Work Groups that presented their latest work on developing a holistic approach to the area's watershed. Right after the Recovery Group's meeting, the CPAT members were introduced. They then explained the CPAT process and engaged the residents on what they'd like to see in the study area.

Read a copy of the article 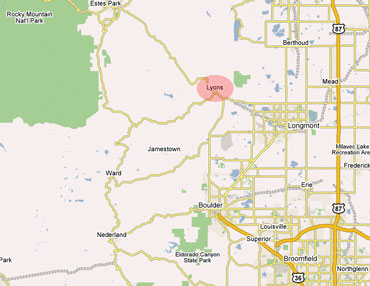 Team leader Gavin Smith, AICP, and APA project manager Ryan Scherzinger visited the Boulder and Lyons area, February 28-30, 2014. Upon arriving, they visited the University of Colorado-Boulder, where Smith provided a lecture for a graduate planning course on hazards. The students are also currently assisting the Town of Lyons throughout the spring semester. During the class, one student provided an overview of Lyons's history and other background information related to the flooding event of September 2013. Smith and Scherzinger then met with Chantal Unfug (Director, Division of Local Government, Colorado Department of Local Affairs) and Iain Hyde (State Disaster Recovery Manager, Colorado Department of Public Safety) followed by a meeting with FEMA representatives. The next day, they met the Lyons Recovery Advisory Committee followed by tour of many of the flood-affected areas in Lyons. During lunch, they met again with a larger group of the resident-led Recovery Advisory Committee to discuss the most pressing issues and how the CPAT could be most effective to their recovery planning process. The two met with a smaller Recovery Work Group to discuss in more detail an appropriate scope of work for the CPAT project. Finally, the group embarked on an additional tour of the area.

News Coverage of the Lyons Project

"The Town of Lyons is so very appreciative of the timely support of APA and the extremely helpful efforts of the CPAT. The team was very responsive to the community's needs and very professional in every aspect of their work here. They helped us focus our efforts on recovery at a very challenging time and were extremely patient with us as we struggled with the daunting tasks ahead of us. The CPAT produced professional maps and documents that our small town does not have the resources to produce, and they developed useful and applicable recommendations that will assist us in our recovery efforts. Thank you so much for your extremely valuable assistance."
-Victoria Simonsen, Lyons Town Administrator

"The national expertise brought by the CPAT was invaluable in providing Lyons with specific strategies for building a more resilient community that will help guide Lyons' long-term recovery efforts. The team was professional, thoughtful, and responsive to community needs. On behalf of the Colorado Department of Local Affairs, we commend the CPAT team members and APA for supporting Colorado recovery efforts."
-Anne Miller, AICP, Senior Planner, Colorado Department of Local Affairs

Gavin Smith is an associate research professor in the Department of City and Regional Planning at the University of North Carolina at Chapel Hill. He is also executive director for UNC's Center for the Study of Natural Hazards and Disasters, and executive director of the U.S. Department of Homeland Security's Coastal Hazards Center of Excellence. Following Hurricane Katrina, Smith worked in the Mississippi Office of the Governor, serving as the director of the Office of Recovery and Renewal. He also served as the assistant director for Hazard Mitigation in the State of North Carolina where he administered mitigation and disaster recovery grant funds in excess of 800 million dollars associated with 10 presidential disaster declarations leading to the acquisition and relocation or elevation of more than 5,000 and 500 homes respectively.

David Perkes is a licensed architect and Professor for Mississippi State University. He is the founding director of the Gulf Coast Community Design Studio, a professional outreach program of the College of Architecture, Art + Design. The design studio has assisted in the renovation of hundreds of damaged homes and over two hundred new house projects in Biloxi and other communities. Perkes has a Master of Environmental Design degree from Yale School of Architecture, a Master of Architecture degree from the University of Utah, and a Bachelor of Science degree in Civil and Environmental Engineering from Utah State University. In 2004 he was awarded a Loeb Fellowship from the Harvard Graduate School of Design. Perkes is part of a four-person national team to receive the 2011 Latrobe Prize from the American Institute of Architects.

Darrin Punchard, AICP, is a principal consultant with MWH Global, where he serves as the Americas Region Leader for Risk Services. He is an urban planner and floodplain manager who has spent his entire career working with local communities to become more resilient to disaster. He has nearly 20 years of experience in hazard mitigation planning with specialized expertise in risk assessment, benefit-cost analysis, and the development of actionable mitigation strategies to include structural and non-structural measures for risk reduction. Punchard prepared some of the nation's first federally approved hazard mitigation plans following passage of the Disaster Mitigation Act of 2000 and to date has assisted more than 500 communities in similar planning efforts. His public service career includes serving as the State Hazard Mitigation Officer for North Carolina, and as a state and local hazard mitigation planner in Florida.

Andrew Rumbach is an assistant professor in the Department of Planning & Design at the University of Colorado Denver. He holds a doctorate and a master's degree in City and Regional Planning from Cornell University and a bachelor's in Political Science from Reed College. His research examines the relationships between urbanization and environmental risk, with special focus on the vulnerability of marginalized communities to natural hazards and global climate change. He has done applied research on disaster recovery in post-Katrina New Orleans, American Samoa following the 2009 earthquake and tsunami, and Colorado after the 2013 flash floods. He is currently completing a multi-year study of disaster risk in Indian cities, focused on the state of West Bengal.