Located just 50 miles from the Great Circle shipping route, Unalaska, the 12th largest incorporated city in Alaska, is 800 miles southwest of Anchorage in the heart of the North Pacific/Bering Sea fisheries. The city itself contains approximately 115 square miles of land and 98 square miles of water. Unalaska is a community of 4,400 permanent residents and 5,000 to 10,000 seasonal workers. For the last 30 years, Unalaska's economy has been based primarily on commercial fishing, seafood processing, fleet services, and marine transportation. The Port of Dutch Harbor is the only deep draft, ice-free port in the area, which is also designated a "Port of Refuge" providing year-round protection for disabled or distressed vessels. Ground/warehouse storage and transshipment opportunities for the thousands of vessels that fish or transit the waters of the Bering Sea are also available in Unalaska.

While there is a vast amount of undeveloped land on the island, there is a limited amount of flat ground readily accessible for development. A CPAT assisted the City of Unalaska with the community engagement component of creating a land use plan, which helped identify areas with cultural, historic and environmental significance. The team provided a knowledge base and facilitated information exchange regarding port planning, housing, and the unique needs of the oil industry as they worked with community members including the native village corporation, the Ounalashka Corporation.

Future Land Use in Unalaska

This report presents the CPAT’s findings, observations and recommendations for the residents and stakeholders of Unalaska, Alaska.

The team briefly toured the Museum of the Aleutians followed by a lunch meeting with the mayor and city manager. In the evening, the team set up for a final open house demonstrating an exhibit of the community's input throughout the week. The team created maps showing areas where community members generally agreed on future types of development.

Members of the team embarked on a tour of the community by water with the Ports Director, Peggy McLaughlin. Team member, Shelly Wade, AICP, conducted outreach with Unalaska high school students and elder residents at the senior center. In the evening team members split up and conducted further outreach at the local grocery store and the Parks, Culture and Recreation (PCR) Center to gather more input from residents.

Groups of stakeholders met with the team throughout the day, including: the city's development review team; members of the Ounalashka Native Village Corporation; the school district and a variety of community organizations; cargo company representatives; marine fuel companies; the U.S. Coast Guard and tug pilots; and local business owners. Each provided a unique perspective of the future development of Unalaska.

The team met at the Unalaska Library to set up their workspace for the week. They then met with city department directors at City Hall for lunch followed by a tour of the community with: City Manager, Chris Hladick; Planning Director, Erin Reinders, AICP; and Director of Ports and Harbors, Peggy McLaughlin. From 7-9 p.m., the team held an open house at the Burma Road Chapel whereby residents stopped in and shared their ideas about what and where they'd like to see in Unalaska. 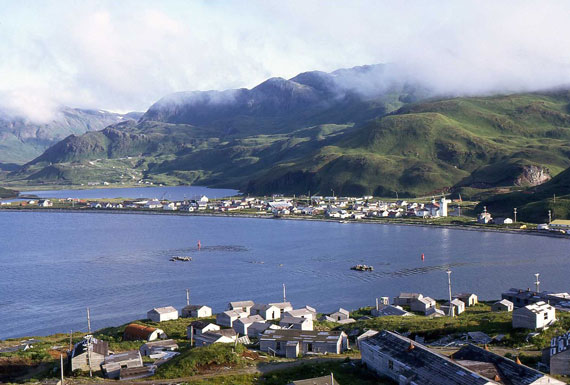 Roger Wagoner is currently director of community design with BHC Consultants LLC. Wagoner is a certified planner with 35 years of experience in planning, environmental analysis, and community development with work provided throughout the Pacific Northwest and Alaska. He is recognized for his expertise in land use planning and growth management plans, environmental and housing analyses, urban design plans, capital development programs and community facilitation. He excels in team building and project team management and has developed planners' training curriculum for state agencies.

Greg Easton has almost 40 years' experience in providing economic consulting services related to economic and community development in the Pacific Northwest region and elsewhere. As a founding principal of Property Counselors and other regional and national consulting firms, he has worked with public and private clients to identify economic opportunities and impacts. He has specialized experience working with waterfront communities to address issues such as marine commerce, tourism development, and public access. He has worked with cities and port districts to identify realistic levels demands for various water-dependent and water-related uses for key sites.

Tom Kurkowski has been involved in the geospatial field for over a decade. In his current role as Operations Lead at the Scenarios Network for Alaska and Arctic Planning (SNAP), Kurkowski leads a highly technical staff in modeling and producing value added products, tools, visualizations, and statistical analyses from historical and projected climate variables. While working for the Alaska Department of Natural Resources, his contributions included development of a wildland fire risk model, methodological development of three- dimensional forest typing, mobile GIS application, and the immediate support of wildland fire suppression activities.

Shelly Wade began her career in Southwest Alaska as an AmeriCorps VISTA volunteer with the Alaska Department of Community and Economic Development in 2001. She has worked with a wide range of clients, most recently assisting with updating the Southwest Alaska Comprehensive Economic Development Strategy. Prior to joining Agnew::Beck, as a consultant at Information Insights, Wade worked with the Aleutian Pribilof Islands Association to develop community strategic plans for Nikolski and St. George. She also worked with the Pauloff Harbor and Unga tribes to develop plans for meeting existing and future needs of tribal members.

Majid Yavary has more than 18 years of experience in the international project/program management, port management, port planning, and marine engineering. He has participated in projects in nearly 50 countries and is qualified in planning, design, and construction of marine structures; design and implementation of large scale capital dredging and reclamation projects; planning, development, and design of container terminals; and marine elements of oil, LNG, LPG, and other liquid bulk import and export terminals. He has served as the principal U.S. representative on the Permanent International Association of Navigation Congress (PIANC) MarCom Working Groups.