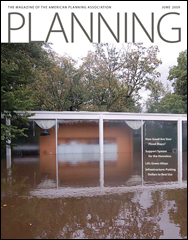 Corry Berkooz reports on supportive housing for the homeless nationwide.

Maria Saporta describes a design charrette for an aging population.

How many of the city's 12,300 byways can be rehabbed? Nate Berg seeks an answer. A green communities story.

Put Your Money Where the People Are

An excerpt from a new Planners Press book by Philip Walker.

A monthly column on stats in the news — compiled by APA's Research Department. This month: floods.

Cover: The Farnsworth House, situated near the Fox River in Plano, Illinois, has been flooded six times since it was built in 1951 — most recently in September 2008. Ludwig Mies van der Rohe, the building's architect, knew the structure would be located in a 100-year floodplain but believed it was relatively safe from flooding. Photo by Landmarks Illinois.