A Centennial Issue: Celebrating the Next 100 Years 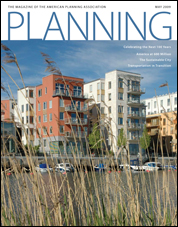 What will the U.S. look like a century from now? Rob Lang, Mariela Alfonzo, and Casey Dawkins offer some thoughts. Deborah and Frank Popper celebrate a post-racial nation.

Tipping the Sacred Cows of Planning

Cities in 2050? David Dixon takes a shot at the future.

John McCarron says it's the process, not the plan, that needs an overhaul.

Climb aboard for Ruth Knack's interviews with transportation gurus. In Planning Practice.

An excerpt from a new Planners Press book by Emily Talen.

A monthly column on stats in the news — compiled by APA's Research Department. This month: demographics.

Research You Can Use

The inaugural, planting with care.