The Daniel Burnham Award for a Comprehensive Plan

Yorktown 2015: A Blueprint for Survival and Sustainability

The Bennett Plan of the City of Pasadena (1925)

The jury is tasked with reviewing all of the award entries and identifying the ones worthy of receiving a national honor and recognition. 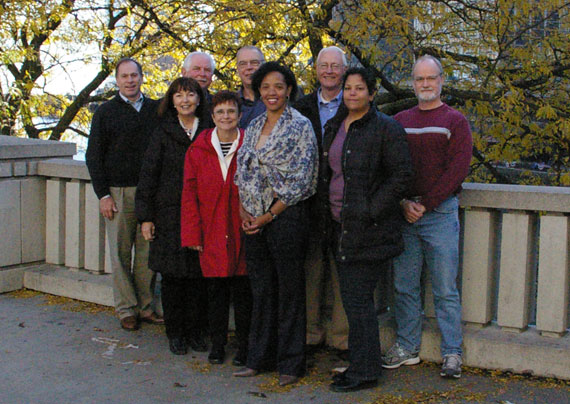 Marie L. York, FAICP, is President of York Solutions and Senior Fellow with the University of Florida's Center for Building Better Communities. With more than 25 years of experience, York is a champion of economic, environmental and social sustainability through planning and design. She created the award winning Florida Public Officials Design Institute at Florida Atlantic University in Jupiter, Florida, teaching elected officials the fundamentals of place-making. York is an APA Board Director and corporate officer as the Secretary/Treasurer. She is the past chair of APA's New Urbanism Division, President of APA Florida Chapter, and Fellow at the University of Miami's Community Building Program. York was inducted into the AICP College of Fellows in 2008.

Ann Cooke Bagley, FAICP, a community planner and consultant, focuses on comprehensive plans, park development, and training planning commissioners. A practicing planner for almost 30 years, she has worked in both the public and private sector working primarily for small to medium size cities. Bagley currently serves on the national board of the American Planning Association as a board member elected at large and serves as the Planning Official Development Officer for APA Texas. She was recently appointed to her fourth term on the Dallas City Plan Commission where she is chair of the Transportation committee and on the Zoning Ordinance Advisory Committee.

Jacques Gourguechon, AICP, is a co-founder of Camiros, and a charter member of the American Planning Association (APA). He has served as president of the Illinois Chapter of the APA and is a member of the American Institute of Certified Planners. He is dedicated to sustainable planning and the protection of the earth's natural resources through thoughtful planning since the inception of his career. In all his work, he displays a commitment to the health of the human component of large and small settlements, as well as the land and resources on which they are built. Natural resource planning and human investment planning together form his mission as a planning leader throughout his 35 year career at Camiros.

Regina Gray is an analyst for the Division of Affordable Housing Research and Technology Division in the Office of Policy Development and Research (PD&R) at the U.S Department of Housing and Urban Development. Since joining HUD in 2000, her research activities have focused on sustainable development, urban design and land use planning, transit oriented development, energy and green building practices, and affordable housing preservation. Beyond her work at HUD, Gray collaborates with other federal agencies on a host of sustainability initiatives, and is actively involved in these interagency efforts. Gray holds a bachelor's degree from Emory University, a master's degree from the George Washington University and a doctorate from the University of Maryland, College Park.

Charnelle Hicks, AICP, is the principal and founder of CHPlanning Ltd, a full service planning firm with offices in Philadelphia, Chester, Pittsburgh and New Orleans. She has practiced transportation, land use, and environmental planning for nearly 25 years and has led numerous planning and development projects for communities and infrastructure. Hicks has served as Vice-Chair of the APA's Transportation Division and as Secretary of APA's Planning in Black Community Division. She currently serves as the Chair of the National Estuary Program's Partnership for the Delaware Estuary and as Vice-Chair of the APA Pennsylvania Chapter. She received her Bachelor of Arts in Sociology and Anthropology from Swarthmore College and her Master of Regional Planning from the University of North Carolina at Chapel Hill.

Phillip McKenna, AICP, is president and CEO of McKenna Associates, Inc., a community planning and design consultant firm headquartered in Northville, Michigan, with branches in Kalamazoo, Michigan, and Cleveland Heights, Ohio. The firm's professional practice includes downtown plans; urban neighborhood redevelopment urban design; open space preservation and design of mixed-use centers. McKenna helped form the Michigan Downtown Association, the trade association for Michigan's downtowns. He is a licensed professional community planning in the state of Michigan and a certified planner by the American Institute of Certified Planners. He earned his master's degree from Eastern Michigan University and his bachelor's degree from Central Michigan University.

Paul Miller, AICP, has been the Director of Planning, Zoning and Building for DeKalb County, Illinois, since 1996. Previously, he was the Village Planner for Glen Ellyn, Illinois, for five years, and before that worked for a planning consulting firm out of Wheaton. He received his Master's degree in Planning from the University of Wyoming in 1988 following a Bachelor of Arts degree in Physical Geography from the University of Central Arkansas. He has been a certified planner since 1992. He has been published in APA's online Practicing Planner, presented at APA's National Planning Conference and presented at a Tuesdays at APA event. He also recently served on an APA advisory panel about wind energy.

Pete Pointner, FAICP, has more than 50 years of experience that includes: teaching at the university level; vice president of an international planning and engineering firm; and founder of an interdisciplinary planning firm with experience in both the public and private sector. He has directed major projects in 25 states and four countries.

Lindy Wordlaw, AICP, is a certified planner with more than fourteen years of planning experience. As Senior Planner at CNT Energy, a division of the Center for Neighborhood Technology (CNT), much of her work is geared toward integrating the goal of sustainable energy use into mainstream planning processes. Starting in 2004, she led the Kane County Energy Solutions project, which predicted growth in Kane County's energy demand (based on projected population growth and land use changes) and recommended strategies for mitigation.