Parks Without Borders: A Free Vision for Urban Space

In our densely populated metropolis, we are fortunate that we have set aside 14 percent of the city's area for public parks, beaches and playgrounds. And you'd be hard-pressed to find a New Yorker who disagrees with this approach. Our parks are our backyards, front yards, living rooms, gyms, and gardens all at once. They are crucial to physical and mental well-being, livability and natural beauty. That is why our parks and public spaces are the green heart of the Greatest City in the World.

But too often, either by well-intentioned design or historical accident, our communities were cut off from the very parks built to serve them.

I first noticed this issue in Prospect Park, which was my neighborhood park when I was growing up in Brooklyn. The Flatbush Avenue area of Prospect Park runs more than a half mile — and that half mile is marred by fences and crumbling pavers and thick vegetation you can't see through — hardly a welcoming approach to one of the nation's most beautiful urban green spaces.

Once I started noticing these barriers to entry, I couldn't stop. In Queens, I saw a high fence caging a small green area with a few trees. In Lower Manhattan, high-fences and often-locked gates keep people out of a stately neighborhood park, even during daytime hours. In the Bronx, a small park vivisected by foreboding chain-link fences separating basketball courts from seating areas from play areas.

That's why last year I launched Parks Without Borders, a new vision for how New York City's parks interact with their communities at entrances and edges. Supported by $50 million in Mayoral funding through the plan OneNYC, Parks Without Borders improves the areas of connection between parks and their communities by making park entrances, edges, and adjacent and in-between spaces more attractive, accessible, and active.

Because this program is centered on bringing people into their parks, we made community input central to our selection process. We put out a call to all New Yorkers to provide comments on an interactive map about how their park edges and entrances could be improved. We expected about 1,000 comments — we got more than six times that, proof positive that New Yorkers everywhere are not only passionate about their parks, they're passionate about making their parks part of their communities.

Drawing from this community input, we took into account community support, park access, and current physical conditions and context to choose the eight winning projects (including the Flatbush Avenue stretch of Prospect Park), which we unveiled at last month's Parks Without Borders summit. The next step will be community input sessions, where we will gather more thoughts from parks users about how to make park peripheries welcoming, more open, and more useful.

While parks represent 14 percent of the city land area, streets and sidewalks cover 26 percent —that means 40 percent of New York City's land is in the public domain. Through the Parks Without Borders design approach and collaboration with agencies like the Department of Transportation, City Planning, and the Department of Environment Projection, we can completely transform this 40 percent, reimagining sidewalks adjacent to parks as parkland, and streets as public space for people and not just cars. 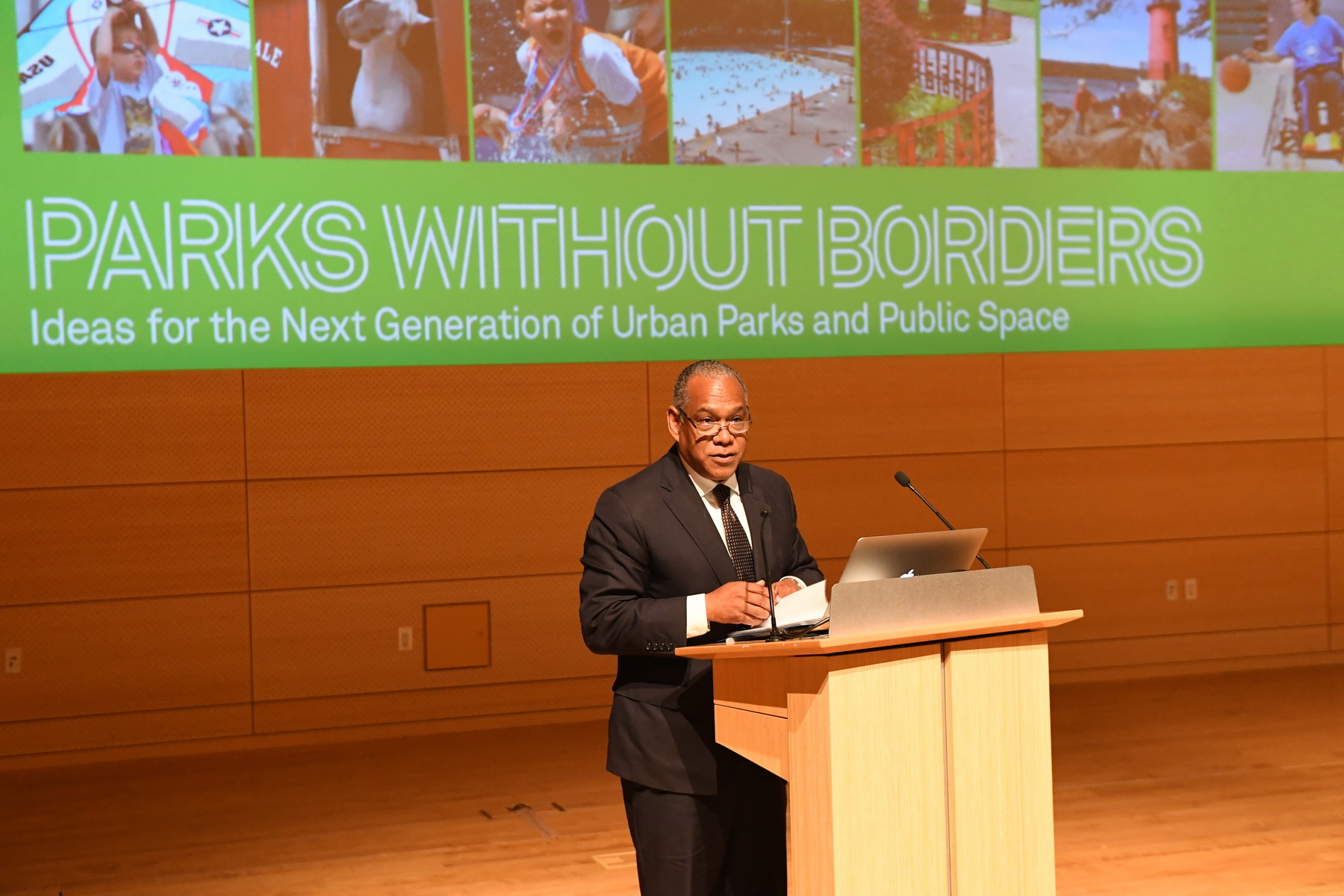 By creating a seamless public realm, this powerful new design approach will transform how New Yorkers interact with parks and public space across the city — and perhaps, across the world. We have gotten interest in the program from urban designers as far as Argentina and Australia.

So keep an eye on your park entrances and edges — they may soon become your favorite bit of neighborhood green space.

The blog at Huffington Post explores improvements in parks around the country in "Urban Parks: From Dumping Grounds to Centers of Energy" and credits the role of Parks Without Borders.

Top image: Prospect Park, the author's local park when he was a child in Brooklyn. Photo by Flickr user cgc76 (CC BY-NC-ND 2.0).

Mitchell Silver, FAICP, is commissioner of the New York City Department of Parks and Recreation and former president of the American Planning Association.