Recognized for its Southern charm, the picturesque Hattiesburg Historic Neighborhood retains many of the bucolic features that helped shape this urban treasure 127 years ago. Streets are lined with mature oaks and crape myrtles, sidewalks connect houses, and porch sitters wave to children on their way to school and engage passersby in conversation.

Neighborhood is bordered by Gordon's Creek to the north, Williams Street and the abandoned Kansas City Southern rail line to the east, Hall Avenue to the south, and the Illinois Central and Norfolk Southern rail lines to the west. 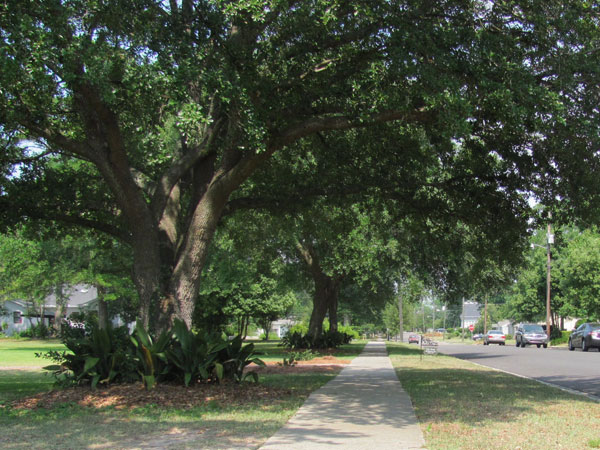 Mature oaks line many of the streets of Hattiesburg. The neighborhood has worked closely with the city to maintain and protect the trees, replacing dead or damaged trees, sustaining the neighborhood urban forest. Photo courtesy of Andrea Saffle.

The neighborhood has one of the best collections of Victorian-era houses in Mississippi. It was founded just a few years after Captain William H. Hardy, sent by a rail company to survey the area, was struck by the region's lush forests. He established Hattiesburg as a timber harvesting and shipping center. Originally part of the 1884 Kamper-Whinery Subdivision, the neighborhood was expanded when the E. Katzenstein and Maria Mars subdivisions were platted in 1896 and 1897.

While a sense of neighborliness has long distinguished this community, today it is known also for its activism. The Hattiesburg Historic Neighborhood Association (HHNA), in an attempt to stabilize the neighborhood, has purchased and renovated several properties, including a former school that is now a condominium. Efforts to protect the neighborhood's character have led HHNA to seek redress both at city hall and in the courts.

While Hurricane Katrina devastated much of Hattiesburg's tree cover, this neighborhood fared better. The regular replacement of aging trees left the canopy in Hattiesburg Historic Neighborhood largely intact. Water oaks, initially planted along every street and right-of-way, were afforded protection, along with all other trees on private property, when the area was declared a local historic district in 1986.

The neighborhood's esprit de corps was never more evident than in the aftermath of Katrina. Residents — some of who worked in or owned downtown restaurants — opened freezers to their neighbors. Others transformed patios and porches into open-air dining halls. 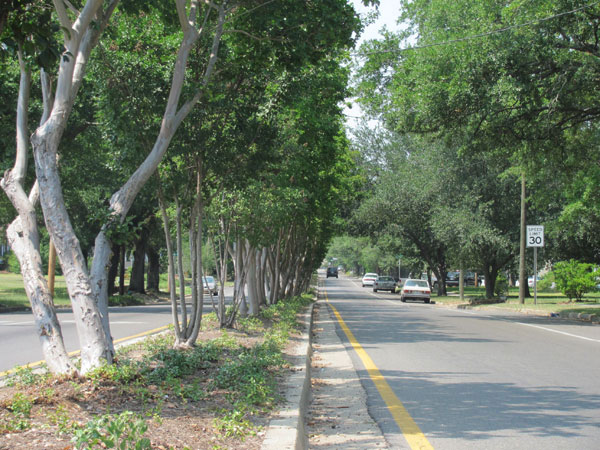 The Bay Street Median is a feature distinguishing Hattiesburg from other residential neighborhoods in the area. The original boulevard hosted a trolley with a double row of watermelon colored crape myrtle trees. These trees once again line Bay Street. Photo courtesy of Andrea Saffle. 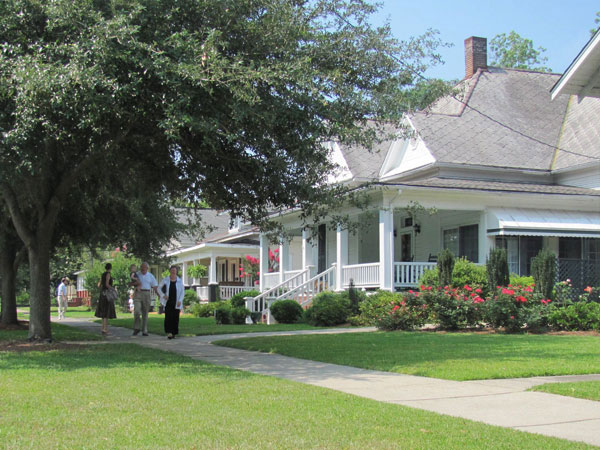 The picturesque tree-lined streets and welcoming sidewalks make historic Hattiesburg a walkable neighborhood and create the atmosphere of days gone by. Neighbors sit on their porches and talk, and residents take leisurely walks in the evening. Photo courtesy of Andrea Saffle.