Downtown Plano was once the sleepy, nearly forgotten heart of a farming community swept away by Dallas's suburban expansion. Today, Historic Downtown Plano is a fascinating mix of future and past. 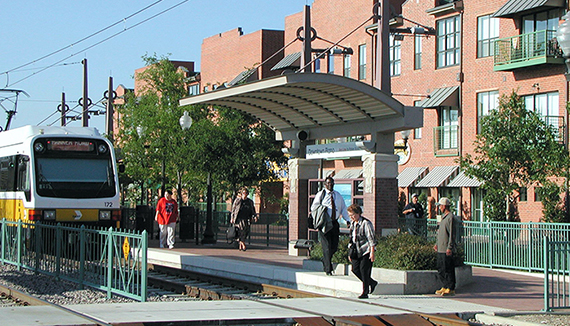 The Historic Downtown Plano renaissance as an urban center was stimulated by the arrival of the Dallas Area Rapid Transit (DART) light rail service. At present, more than 1,000 residential units are within a quarter-mile of the station. Photo City of Plano.

The area is experiencing a renaissance as an urban center stimulated by the arrival of Dallas Area Rapid Transit (DART) light rail service. Downtown Plano has a rich history of visionary home-grown citizens, committed to working in partnership with city officials to create a great place. A robust transit village plan, developed in partnership with the city, residents, community development organizations, and consultants, has reimagined the neighborhood's functionality and is exemplary of a true planning success story.

Downtown Plano has maintained its historic feel while integrating modern planning practices such as high-density, mixed-use development. Its iconic red brick streets delineate the neighborhood and set it apart from the rest of the city. Buildings dating back to the 1890s line the streets, renovated into a quaint 80-acre collection of shops, restaurants, arts venues, museums, and housing. With easy access to Dallas and the rest of Plano, residents have flocked to the area resulting in more than 1,000 residential units within a quarter mile of the DART station.

While Plano is a car-dependent city, the downtown neighborhood has been designed with pedestrians and cyclists in mind, making events like the Plano International Festival in Haggard Park even more accessible to residents and visitors.

Since earning its Great Place designation, Plano has been recognized for excellence in comprehensive planning, and added to the National Register of Historic Places. 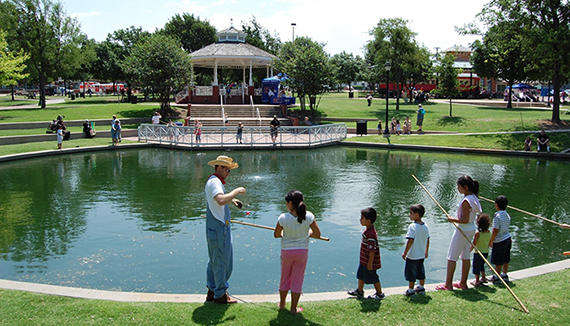 Once the sleepy, nearly forgotten heart of a farming community, Haggard Park now exemplifies the fascinating mix of past and present in Downtown Plano. Photo City of Plano.

Downtown Plano's transformation into a lively and authentic neighborhood, offering a transit-oriented urban lifestyle rarely found in suburban communities, is tied to the light rail station completed in 2002. 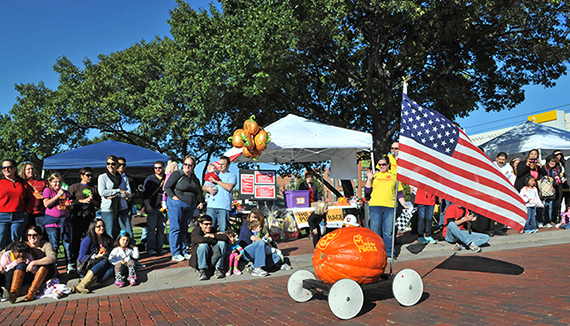 Downtown Plano has a rich history of visionary home-grown citizens, committed to working in partnership with city official to create a great place. Photo City of Plano.

1999 Downtown Plano: A Vision and Strategy for Creating a Transit Village