To Charleston, South Carolina, Mayor Joseph Riley's way of thinking, a city can't have too many parks, but if he had to choose a favorite, it's likely to be the 13-acre Waterfront Park along the Cooper River.

Completed in May 1990, the park provides residents and visitors alike a place where they can find a quiet place to sit and take in water views of the Cooper River, watch children play in the interactive spray and water fountains, or stroll along the park's waterfront promenade under a canopy of mature live oaks.

The setting is one of 10 Great Public Spaces for 2008 designated by APA given its welcoming design and public accessibility, unique design integrating the park's two basic elements, land and water, and its role in the successful revitalization of downtown Charleston. 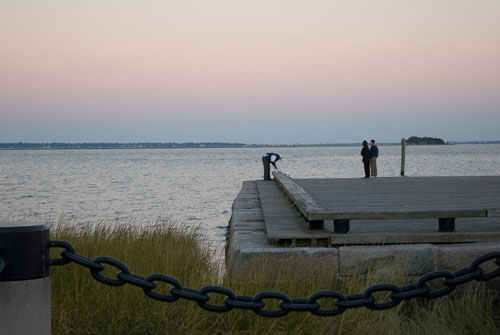 The salt marsh and Adger's Wharf — where the relationship with the Cooper River is most intense. "The waterfront park is without a doubt one of the most beautiful in the nation," says Charles de Williams of the Post and Courier. Photo courtesy Craig Kuhner.

Public access to this portion of Charleston's peninsula waterfront wasn't always assured. Before the city purchased the property in 1979 — the last piece of Cooper River waterfront available along this segment of the water — it was slated for high-rise commercial and residential development. Work building the park didn't begin until 1988.

During that time downtown Charleston was undergoing major revitalization guided by several plans and studies, including the Lower King Street District plan, the 1978 Tourism Impact and Management Study, and the 1982 Visitor Accommodations Study. Among their recommendations was keeping part of the Cooper River waterfront close to downtown open to the public.

The $13.5 million park, was designed by a team of consultants led by Stuart O. Dawson, a design principal with Sasaki Associates, Inc. Mayor Riley also was involved, as were now-retired city parks director Steve Livingston, and several citizens, including the late Charles and Betty Woodward.

Mayor Riley's vision for the park was a place of "inspiration, repose and beauty." It is not a place for rallies, concerts, or other large public gatherings. Nor are either of the park's two piers designed to accommodate boats. Those, the mayor said in an interview with Florida's Bradenton Herald newspaper, were designed "to be a way for all people who don't have boats to get to the water. I wanted [the piers] to give the average citizen the feeling of being on a boat." 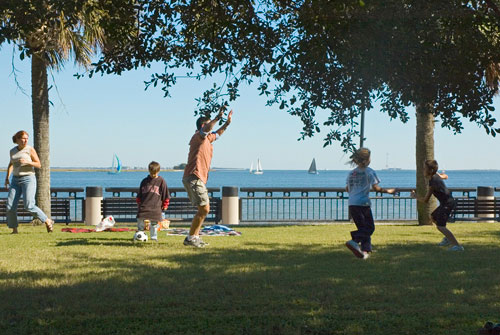 Framed by the live oak bosque to the west and the palmetto-lined promenade to the east, the Great Lawn provides space to play and view to the river. Photo courtesy Craig Kuhner.

Built with long-lasting materials and along classic lines, the park features bronze castings of historic maps showing various stages of the city's development, and fountains made from granite, bronze, and cast stone. The center of the park has a fountain that features a golden pineapple while the main pier has six swinging "Charleston chairs" large enough to hold an entire family.

Strategically located in lower downtown Charleston, Waterfront Park provides a place of quiet, even contemplation, that is juxtaposed to the adjoining commercial and much busier areas of the city's downtown. It is the only park located in the lower part of downtown Charleston, the setting affords visitors unique views of the Cooper River not found anywhere else.

The park also has been an integral part of the city's planned $400 million downtown revitalization that attracted some $337 million in private capital, or a return of $4.62 on every public dollar invested.

In 2007 the park was recognized by the American Society of Landscape Architects and National Trust for Historic Preservation with a Landmark Award, which recognizes distinguished landscape architecture that makes a significant contribution to the public realm.

Waterfront Park, as Mayor Riley describes it, is like an outdoor cathedral surrounded by sky and stars, trees and water, and Charleston's downtown skyline. 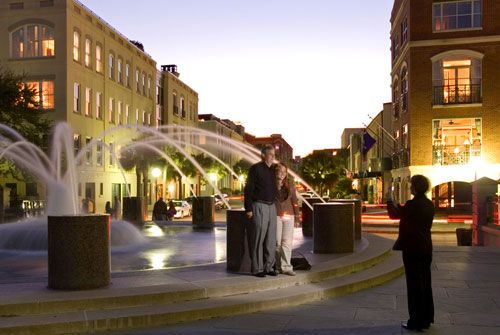 Vendue Plaza, with its interactive fountain and blue stone paving, is one of the landmark spaces that celebrate the meeting of the city grid and the river. Photo courtesy Craig Kuhner.