Today Bryant Park is a 9.9-acre lush green gem in midtown Manhattan, but only decades ago it was overrun with drug dealers and avidly avoided by the public. Renowned public space expert and author William "Holly" Whyte was convinced the park could be transformed into one of the country's outstanding public spaces.

Sited between 42nd and 40th Streets to the north and south, the back side of the New York Public Library to the east, and the Avenue of the Americas to the west. 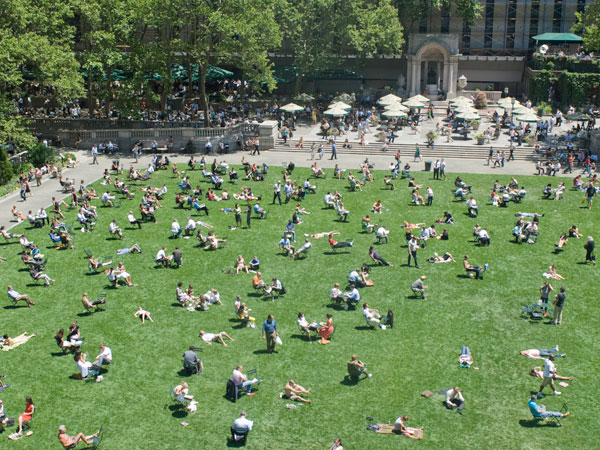 Depending on the time of day, Bryant Park's expansive lawns serves as a lunchroom, outdoor cinema, concert auditorium, or simply a place to sunbathe and enjoy the surroundings. Photo courtesy of Marco Castro.

Today Bryant Park is a 9.9-acre lush green gem in midtown Manhattan, but only decades ago it was overrun with drug dealers and avidly avoided by the public. Renowned public space expert and author William "Holly" Whyte was convinced the park could be transformed into one of the country's outstanding public spaces.

The park's classical landscape design, created in 1934, was intended to inspire relaxation and retreat by elevating the site four feet above street level and including dense shrubbery, an iron fence, stone balustrades, and only a few entrances. The design ended up isolating the park from the street and making it a haven for illicit activity.

Shortly before the Bryant Park Restoration Corporation (BPRC) was founded in 1980, Whyte was recruited by the Rockefeller Brothers Foundation to report on existing park conditions, as well as suggested improvements that would lead to an elaborate restoration plan. His proposal included lowering the park to street level, removing the obstructing hedges and fence, and adding entrances to promote pedestrian flow, increased visibility, and improved safety. Recognizing that a successful park is a crowded one, Whyte and BPRC were resolute about designing a park that would attract as many people as possible by making the space welcoming, comfortable, and interesting to people of all ages.

By all accounts the redesign succeeded. During warm months, the essentially crime-free park attracts 25,000 visitors a day, including midtown workers, students, families, and tourists. The major draw for most is the unbroken expanse of grass — the largest in Manhattan south of Central Park. Depending on the time of day the lawn serves as a gigantic lunchroom, concert auditorium, outdoor cinema theater, or a casual place to sunbathe, meet people, chat, or read. During winter, the lawn becomes The Pond, the only free ice-skating rink in the city.

Besides the new design, contributing to the park's success is the continual assessment of how people are using the park. The Bryant Park Corporation notes that "virtually every decision is predicated on whether it will attract visitors or increase linger time." For example, Whyte's philosophy that movable furniture gives people a sense of empowerment led the park to provide 4,000 chairs and 1,000 tables that visitors can position where they want. 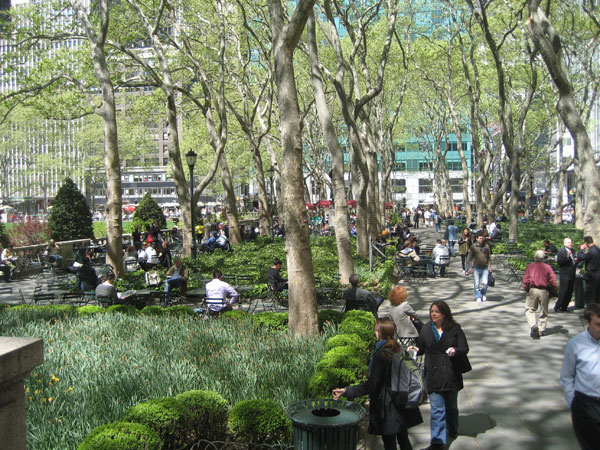 Bryant Park features over 5,000 pieces of moveable furniture, a concept espoused by Holly Whyte, which allows visitors to gather wherever they please. Photo courtesy of Norman Mintz.

Commitment to the Public 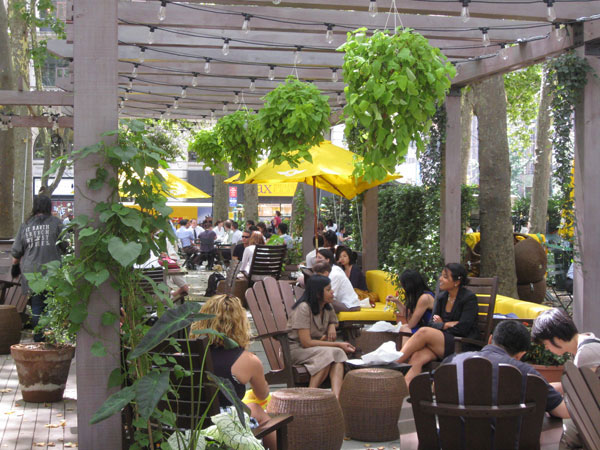 World-class amenities, including restaurant pavilions, food kiosks, and meticulously kept restrooms, are the rule in Bryant Park and make the area inviting to pedestrians. Photo courtesy of Maureen Hackett.