Milwaukee RiverWalk was planned as a down-to-earth public space where residents could take peaceful walks, dine outdoors, and access the river for fishing, kayaking, and canoeing. It has been more successful than anyone involved with the unique public-private initiative ever imagined. Construction of the $35 million pedestrian-only walkway, which has one of the most innovative bridges found anywhere, increased the value of adjoining property by more than $500 million. Removal of a dam at the northern end of the walkway, a cleanup of river pollution, and wastewater treatment improvements have enhanced water quality and helped restore fisheries to the river.

RiverWalk extends along both sides of the Milwaukee River from the harbor in the Third Ward District north through downtown to the former North Avenue Dam. 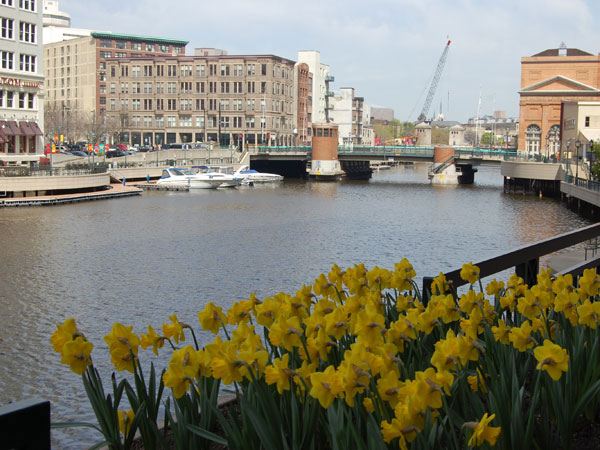 The walkway is adorned with plants, many of them indigenous to the area. Businesses are responsible for maintaining and planting their sections. Photo courtesy of the Department of City Development.

Initiated by former mayor John O. Norquist in 1988, the planning and development of Milwaukee RiverWalk involved a partnership between the city and property and business owners along the river. Gary Grunau led the business community's support, which was essential because public access along the walkway is granted through easements.

Residents, including children, played an important role in helping plan and design RiverWalk. More than 200 students explored the Milwaukee River and made drawings of what they discovered. The result was 18 pieces of artwork being selected and cast in bronze medallions located throughout the length of the Riverwalk.

Other public art includes the "Bronz Fonz," a statue of Henry Winkler who starred as Fonzie in Happy Days, the popular television sitcom set in 1950s-60s Milwaukee.

The pride residents have for the RiverWalk and everything it has done to improve downtown and adjoining neighborhoods is unmistakable. RiverWalk designer and landscape architect Ken Key has an explanation: "The more you can do to make people feel that this is about connections, the better." 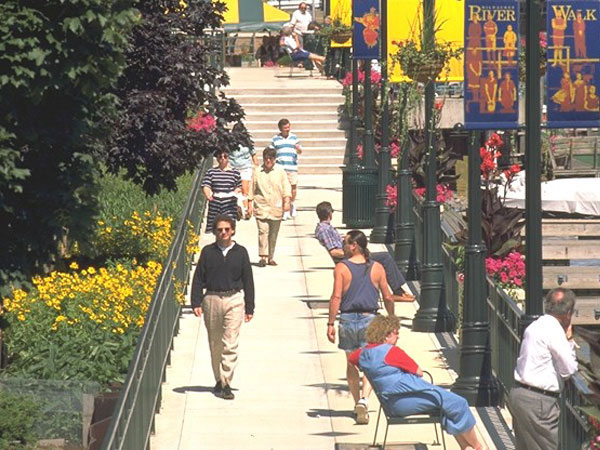 The RiverWalk is thronged with pedestrians taking advantage of a cleaner river and fresh air. The walk is open only to pedestrians, however, it will be 100 percent ADA compliant within the next year. Photo courtesy of the Department of City Development. 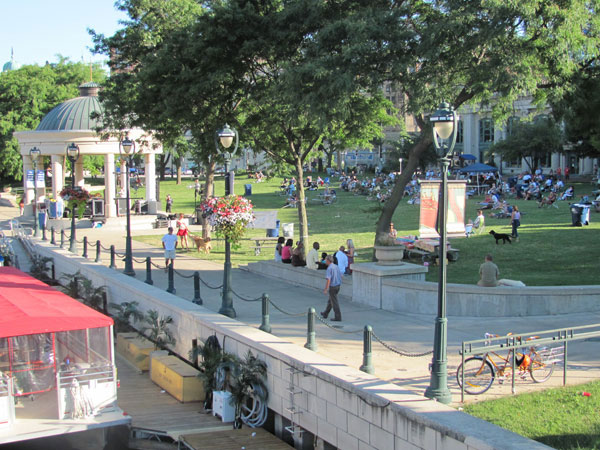 Located along the walk in downtown is Pere Marquette Park, the site of concerts and festivals. Lush grass, shady trees, and a gazebo are a natural draw for visitors to rest and enjoy the view. Photo courtesy of the Department of City Development.