For over 100 years, Balboa Park has served as San Diego's flagship public space. Its exquisite design features a plethora of attractions, which draw millions of San Diegans and visitors to the park each year. 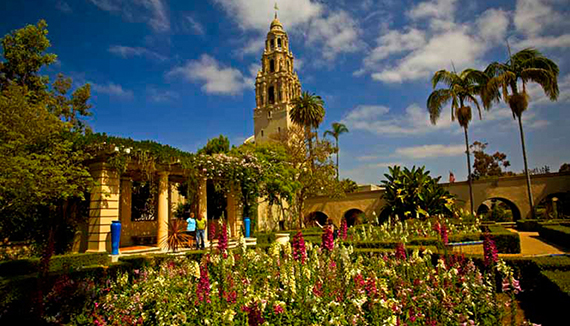 The California Tower is undoubtedly the focal feature of 1,200-acre Balboa Park. Completed in 1915 for the Panama-California Exhibition, the tower is seen here from Alcazar Garden, a public space modeled after the Alcazar Castle in Spain. Balboa Park boasts a wealth of plant species and ornate gathering places. Photo City of San Diego.

Balboa Park is home to the world-famous San Diego Zoo; 15 major art, history, science, and sports museums; indoor and outdoor performance spaces; lush gardens; dog parks; trails; informal recreational spaces; and restaurants. Balboa Park is a complete destination in the central heart of San Diego that draws you in and makes you want to stay for the day.

In 1868 San Diego civic leaders set aside 1,400 acres of land, known then as "City Park." For 20 years, the park remained without landscaping or development. In 1892 prominent horticulturist Kate Sessions, also known as the Mother of Balboa Park, started to make donations in the form of trees and shrubs. In exchange, she was to receive 32 acres of land within the park's boundaries to be used as her commercial nursery. In the early 1900s, a master plan for Park improvements and beautification was introduced, and in 1905 a new City tax supported Balboa Park's early development. The city installed water systems and built roads, allowing the park to develop into the multi-faceted urban park it is known as today.

In 1915 the Panama-California Exposition was to be hosted by the City of San Diego, but it was felt that "City Park" was not a "distinctive-enough" name for the site of such prestigious event. A naming contest was held, eventually leading the park commissioners to choose the name Balboa Park in honor of Spanish-born Vasco Nunez de Balboa, the first European to sight the Pacific Ocean while exploring Panama.

After the exposition, the U.S. Navy occupied portions of the park to train sailors during World War I. In fact, the park's iconic lily pond, located in front of the Botanical Building, was used to teach sailors to swim. While most of the buildings from the first exposition were designed and built to be temporary, San Diegans became attached to the park, and efforts were made to preserve the buildings. To help improve the local economy after the Great Depression, a second exposition was held in 1935. Like the first, the second was also extended for two years.

Efforts to preserve the park's acreage and maintain historic resources are ongoing. Portions of the park are listed on the National Park Service's National Register of Historic Places, in the following areas of significance: architecture, art, education, landscape architecture, and sculpture. Many of the buildings constructed during the expositions were built with wood-lath construction. Some were destroyed by fire in the 1960s and have been rebuilt. There are also a number of Capital Improvement Projects (CIPs) that require significant investments. To help address the park's needs, the Balboa Park Conservancy was recently formed.

The park presently consists of approximately 1,200 acres. Over the years schools, freeways, the San Diego Naval Medical Center (with 6,000 employees), and other uses have decreased its overall acreage. 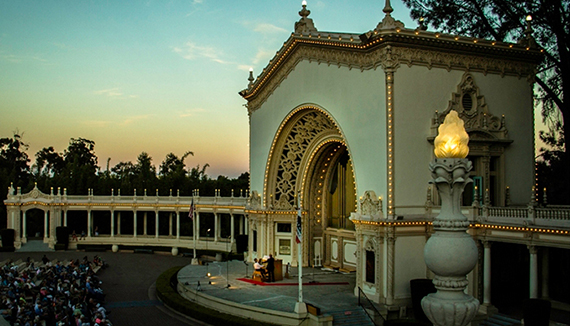 One prime example of the variety of spaces within Balboa Park is the Spreckels Organ Pavilion. This 100-year-old civic space has played host to concerts, movies, music lessons, ceremonies, and more over the years. Photo City of San Diego.

What doesn't this century-old, magnificent park have? Balboa Park boasts an impressive collection of museums and institutions, and is beloved by locals and tourists alike.