Not long ago, the Delmar Loop was nothing more than a strip of mostly vacant, boarded-up storefronts. Missing was the energy and vitality of today's street, an eclectic arts, entertainment, dining, and shopping district in University City, Missouri.

The American Planning Association has selected the Delmar Loop as one of 10 Great Streets in America because of the sustained efforts of local business, government, and the community to achieve successful physical and economic revitalization. 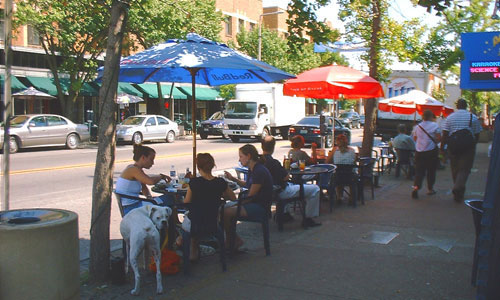 The Delmar Loop is the economic backbone of the area and derives its name from the turnaround that once enabled streetcars to return to nearby St. Louis. Both tourists and local residents frequent the boulevard's galleries, restaurants, and nightclubs. Locals come to The Loop on foot while others arrive by MetroLink, the area's successful rail system. If Loop advocates are successful, a trolley eventually will shuttle passengers between the Missouri History Museum in Forest Park and Delmar Boulevard. A $1.5 million feasibility study is expected to be completed in early 2009.

The street was established in 1891 after the state legislature empowered St. Louis to create boulevards by ordinance. Area attractions initially included the Delmar Rack Track and the Delmar Garden Amusement Park. After University City incorporated in 1906, shops, offices, and apartments replaced the entertainment venues. By the 1930s, The Loop was a thriving retail area. Its well planned streets and variety of land uses made the area especially attractive to pedestrians.

The arrival of suburban shopping malls in the 1950s took its toll on the street. As the area began to decline, a revitalization plan channeled nearly $8 million into the area, allowing University City to demolish substandard buildings and offer low-interest loans for renovation projects. The city widened sidewalks and narrowed streets to slow traffic and create space for outdoor cafes.

Probably the city's most prescient decision in the 1960s was to reserve all streetfront building space for retail, restaurants, shops, and galleries. Existing office tenants were grandfathered in, but when a first-floor office was vacated, landlords could rent only to commercial users. This led to more than 140 boutiques, eateries, and entertainment venues along the boulevard between Des Peres and Trinity. 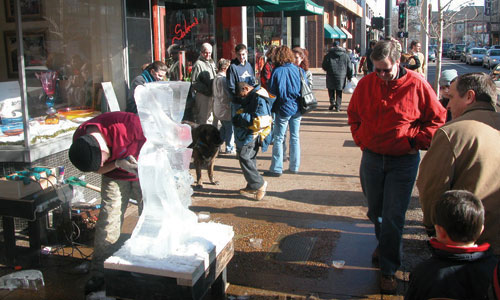 Despite the zoning change and streetscape improvements, the area remained deserted. The comeback began in earnest in 1972 when a young entrepreneur and his wife opened Blueberry Hill, a neighborhood pub. Owner Joe Edwards organized local business owners. In 1980, he helped create a special taxing district to raise money for streetscape enhancements that included dusk-to-dawn lighting in alleys, flower planters, and unique, eye-catching holiday decorations and store awnings. Last year, voters approved an additional one-quarter of one percent retail sales tax, portions of which are earmarked for street improvements and the proposed trolley.

The Loop's placement on the National Register of Historic Places in 1984 led to an increase in renovations as developers qualified for federal tax breaks. As new businesses opened along the Delmar Loop, Edwards and others became more involved in redevelopment efforts. This in turn attracted more residents to houses ranging in price from $50,000 to $1 million.

Following the 1993 opening of the MetroLink station, Edwards purchased and restored the 1924 Tivoli Theatre. In 2000, he opened The Pageant, a concert nightclub on the Delmar Loop, extending the thriving retail and entertainment district into neighboring St. Louis. Across the street from The Pageant now sits the Regional Arts Commission's $11 million Cultural Resource Center. A boutique hotel is being planned for a late 2008 grand opening.

The sustained efforts of local business and government combined with community support have fueled the revitalization of the Delmar Loop. This is not a cloned street, but a vibrant place with a character all its own. As the Loop community grows physically and economically, it seeks to attract businesses that complement and build on the street's unique identity, continuing its prosperity and vitality. 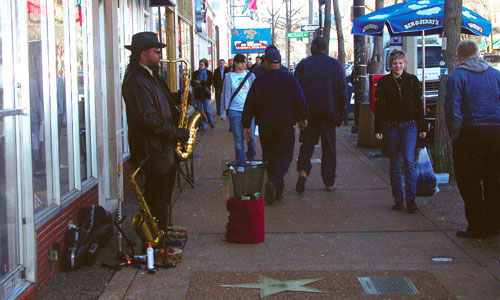