Few streets in the United States can match the splendor imparted by Monument Avenue, and its surroundings in Richmond, Virginia. Designated a National Historic Landmark in 1997, the avenue's linear corridor is an excellent example of the late 19th century Beaux-Arts–inspired urban boulevard design that emphasizes order, symmetry, hierarchy, and planning.

The American Planning Association has selected Monument Avenue as one of 10 Great Streets in America for 2007 given the corridor's historical residential design and craftsmanship, diversity of land uses, and the integration of multiple forms of transportation throughout history — as well as commitment on the part of the community to preserve its legacy. 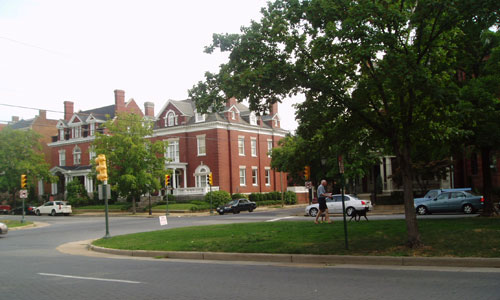 Monument Avenue and its historical pavers. Courtesy of Monica Groh.

The avenue's 130-foot-wide right-of-way contains a 40-foot, tree-lined median in the center with adjacent 36-foot-wide, two-lane streets and double-wide, 10-foot sidewalks on each side. Interspersed at key cross streets are six memorials that pay tribute to the past (Civil War General Robert E. Lee and four of his Confederate contemporaries) and to the present (black Richmond native, humanitarian, and tennis champion Arthur Ashe).

The avenue is replete with architecture from the late 19th and early 20th centuries including Colonial Revival, Craftsman, Classical Revival, Mediterranean, Romanesque, and Tudor Revival. Here is a place that motorists use everyday, but that each year attracts pedestrians, festival-goers, and others by the thousands.

A straight extension of downtown's Franklin Street, the avenue is on perfect lateral axis with the state capitol building designed by Thomas Jefferson and built in 1785. Entering Richmond from the west and greeted at Roseneath Street by the Ashe statue, the avenue provides a stunningly unified procession to the denouement of Capitol Square.

The avenue is also memorable because of the community that sustains it. In 1968, resident Helen Marie Taylor stood in front of a paving machine that was about to cover the roadway's original asphalt paving blocks. Soon after, with the support of a growing preservation movement in the U.S., the history of the avenue became a part of the public agenda when it was designated a City of Richmond Old and Historic District. 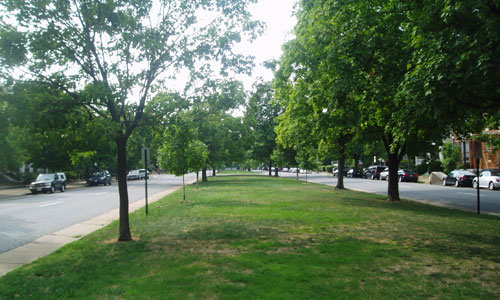 The median of Monument Avenue. Courtesy of Monica Groh.

Since Taylor made her stand, deteriorating mansions along the avenue have been restored; buildings converted to commercial use have been returned to residences; and, more recently, an old apartment building once used for office space is now an assisted living facility, providing opportunities for aging-in-place.

The boulevard continues to be one of the most vigorously used pedestrian spaces in the city, says Richmond planner T. Tyler Potterfield, whether it's jogging, dog walking, the annual Easter parade, or a specialized event like the avenue's 10K Race. "It's just a very grand space," he says, "but people feel very comfortable with it. It's not daunting."

No museum piece, yet rich in history, Monument Avenue instills a sense of the past with the present, making even an ordinary ride or everyday stroll down this boulevard something extraordinary and long remembered. 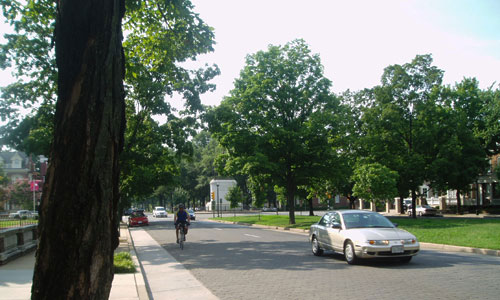 A Monument Avenue cyclist and automobile. Courtesy of Monica Groh.