South El Paso Street, a center of commerce for residents of El Paso and nearby Juarez, Mexico, for more than 150 years, is where American and Mexican cultures come face to face. Rich in history, culture, and architecture, the street has been the center of attention for El Paso as its local economy has ebbed and flowed.

One of APA's 10 Great Streets in America for 2008, South El Paso Street is noteworthy for its historic architecture, unique bi-cultural heritage, and community activism connected with protecting and maintaining the street's unique character. 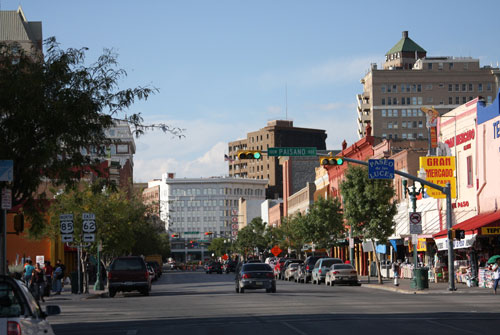 Long a thoroughfare for travelers, refugees, and businessmen, South El Paso Street was a part of the city even before Anson Mills surveyed and platted El Paso's core in 1859. Many famous folk — Wyatt Earp, Billy the Kid, Pancho Villa, and U.S. President Taft — have walked this street.

Once home to mostly adobe structures, South El Paso Street today is a mix of architectural styles. The southern end, which connects to the Santa Fe Bridge and crosses the Rio Grande into Mexico, consists of small, older buildings. Continuing north, some of the city's most well-known historic structures come into view. This portion of South El Paso Street is distinctly American in feel.

Hotels and theaters document El Paso's historic importance as a stopping point between Dallas and Los Angeles. Five buildings along South El Paso Street are on the National Register and several have been restored to their former glory. The 1912 Hotel Paso del Norte — with its breathtaking 25-foot Tiffany glass dome — is a shining testament of the city's colorful past and vibrant future. The 17-story hotel, now called the Camino Real, exhibits a strong Sullivanesque influence.

In August 2008, the Plaza Theatre reopened, drawing 30,000 moviegoers during the first 10 days. This 1930 Spanish Colonial Revival style theater is home to a Mighty Wurlitzer Organ used in vaudeville shows and sing-a-longs before and after films. The theater's existence is a testament to community activism. In 1986, after years of infrequent programming, the Plaza Theatre was slated for demolition. Spurred by a groundswell of support, the El Paso Community Foundation raised $1 million in six weeks to save it from the wrecking ball.

Southern South El Paso Street has the feel of an open air market. Store doors remain open as goods are sold inside and out. Merchants call out, "Pásale," inviting passersby to stop. The street's flavor is predominantly Mexican as are more than half the shoppers. Improvements — such as the 1994 installation of turn-of-the-century street lights and new trees — have transformed the right-of-way into an attractive, bright entrance to numerous downtown attractions.

The relationship between El Paso and Ciudad Juarez is important. As early as 1925, when El Paso adopted its first city plan, leaders recognized the benefits that could accrue from allowing a flow of commerce between Ciudad Juarez and El Paso. 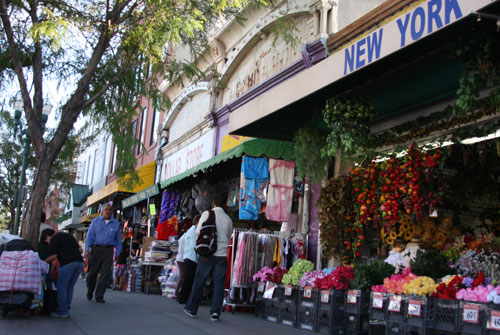 El Paso thrived for nearly half a century then began to lose momentum. Downtown withered with suburbanization and the loss of industry to Asia. The 1974 closure of the trolley, which ran along South El Paso Street, seemed to seal the area's fate.

Establishment of a tax increment financing district in 1979 stimulated private investment in downtown. The city adopted a landmark preservation ordinance to safeguard its historic and cultural heritage and rezoned the area to protect the residential character of the neighborhood adjoining South El Paso Street.

By 1982 the city and South El Paso Street merchants were exploring redevelopment opportunities. But when the peso's value plummeted, hitting businesses hard, revitalization efforts came to a temporary halt.

The most recent downtown plan seeks to reinvigorate areas around South El Paso Street by creating districts for entertainment, mixed uses, and shopping and dining. While the plan has resulted in the refurbishment of several downtown hotels and office buildings, it is not without controversy. Some fear the loss of low-income housing while others believe that planned new housing will bring increased options for low-income households.

Despite setbacks in other parts of the downtown, South El Paso Street remains an economic and cultural anchor, a place where commerce, culture, and community combine to create a place that is uniquely El Paso. 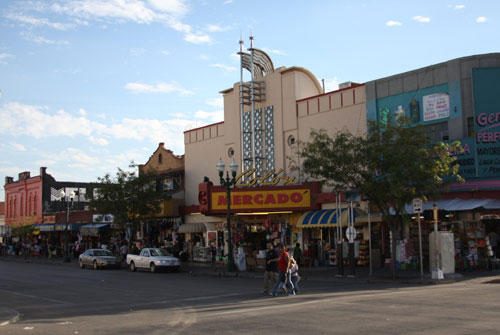 A variety of businesses have set up shop along South El Paso Street near the Mercado Colon. Photo courtesy Mariano Soto.