By the late 1960s, after decades of decline, West Main Street in downtown Louisville, Kentucky, was on its last legs. Many of the late 19th century buildings with cast-iron facades were boarded up. Public opinion was favoring demolition, not preservation and reuse.

The buildings not only still stand today, they have inspired a renaissance that has turned West Main between Second and Ninth Streets into a vibrant commercial, residential, retail, and entertainment district.

APA has singled out West Main as one of the Great Streets in America for 2008 given the street's rich architectural legacy, unique sense of place, and contributions to downtown Louisville's redevelopment, which has attracted $1.8 billion in reinvestment since 1992. 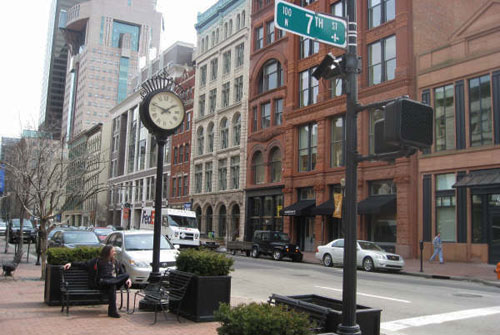 River-based commerce and trade fueled Louisville's early growth following its settlement in 1779. West Main was the first street residents established in their new town. By the 1830s, the city's prosperity supported a prolonged building boom that included construction of the St. Charles Building in 1832 and in 1837 the Actors Theatre, which is a designated National Historic Landmark.

Following the Civil War, Louisville experienced another building boom that led to the construction of the cast-iron facades found today between Sixth and Ninth Streets — the second largest number in the country behind South of Houston Street (SoHo) in New York City.

Although one of the country's deadliest tornados devastated much of the street in 1890, West Main's prosperity continued until the Great Depression. Disinvestment during the 1930s continued after World War II as businesses and residents moved to Louisville's suburbs.

The first plan to address downtown's deteriorating condition was completed in 1965. While the street's architectural gems were still in danger of being torn down, awareness about their value was starting to grow. In March 1974, West Main between Sixth and Ninth streets was added to the National Register of Historic Places. In October of that year, the city established a local preservation district along the street.

The city also recognized that the plan's goals of turning downtown around  and making West Main more pedestrian friendly would not happen on their own. Public leadership and investment were needed as well. 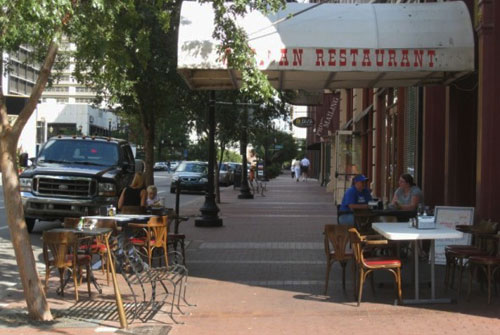 Changes to the street included reducing West Main's right-of-way so sidewalks on each side could be widened five feet. A host of intricate design features, some patterned after details used in historic building facades, were incorporated into the infrastructure improvements. Cast-iron tree guards made from artist-commissioned designs were based on Kentucky walking sticks, and building cornice treatments and other decorative touches were copied and incorporated into sidewalk benches.

The city also has carved building addresses on blocks of limestone in tribute to the material that West Main Street sidewalks were once made from, and placed the limestone in the sidewalk in front of each building.

The Downtown Development Plan, which was updated in 2002, also recommended the creation of a Cultural Arts District along three blocks of West Main Street to help generate interest and attract visitors to the area. The district, which extends between Sixth and Eighth Streets, includes the Louisville Slugger Museum with its signature 120-feet-tall baseball bat; the Louisville Science Center; the Kentucky Center for the Arts; the new Muhammad Ali Center; the Kentucky Museum of Arts and Crafts; and the Images Friedman Gallery.

To help reduce energy use downtown, downtown workers are encouraged to bike or use public transportation. A tire-wheel trolley bus makes stops at each block of West Main, and hybrid city buses provide service between downtown and Louisville's suburbs.

Mayor Jerry Abramson says the success of West Main Street's renaissance and the positive effect it is having throughout downtown would not be possible without the collaboration of residents, business people, and city planners. "We have collectively breathed new life into this street," he said, showing what planning and partnerships can accomplish not only downtown Louisville, but in other cities as well. 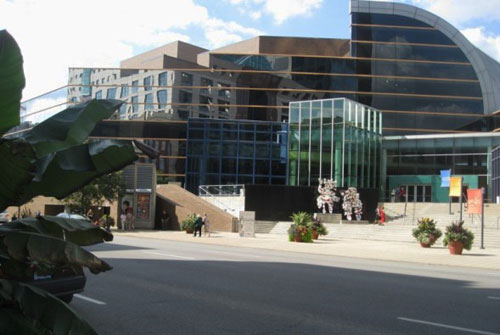 Louisville's dedication to the fine arts can be experienced through several arts museums, spaces for performing arts, and many events and activities. Photo courtesy Ron Scherzinger.