The center of commerce, government, and fellowship in Bath for 200 years, Front Street is one of Maine's architectural treasures. Bath's maritime and shipbuilding history permeates the street, which affords scenic views of the Kennebec River and the city's place-defining trademark, the giant red-and-white Bath Iron Works crane. Familiar with adversity, the street has rebounded from hardships, disasters, and disinvestment time and time again. Bath's merchants and citizens, unwilling to concede defeat, have stood together and rebuilt what was razed and revitalized what was shut down or boarded up.

Six blocks, some no more than 50 feet in length, between Vine Street to the south and Oak and Commercial Streets to the north. 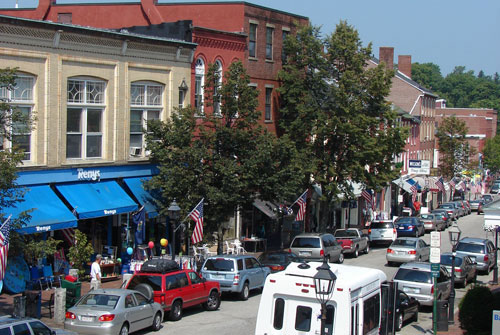 While Front Street is historic, it's hardly static. Construction of a new hotel, compatible with surrounding buildings, is underway. As the city looks to diversify its economy, Front Street remains Bath's center stage. 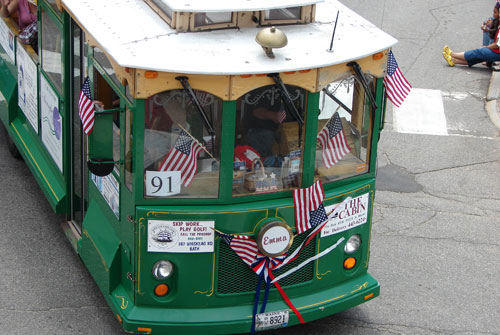 The smallest community in Maine with bus service, Bath's beloved 'Emma' the Trolley is a good way to see the city's landmarks. Photo courtesy of City of Bath. 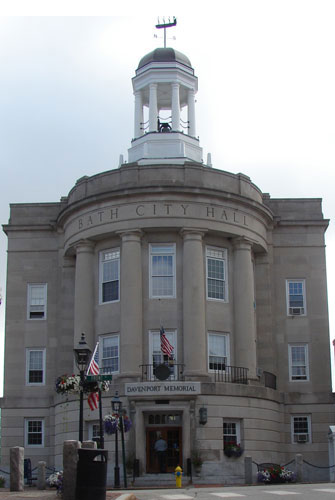 Bath's city hall is a visual and literal anchor of downtown and serves as the start and end point for two publicly operated trolley loops. Photo courtesy of City of Bath.