During the course of its 126-year history, Bank Street has brushed up against fate — and total ruin — three times. The street was rebuilt twice after two devastating forest fires around the turn of the 20th century, including the largest in U.S. history in 1910. Sixty years later, Bank Street began its third dance with death when the Federal Highway Administration proposed razing most of the street's historic buildings to route Interstate 90 through the center of town. The small mining town of 900 residents, led by businessman Harry F. Magnuson, defeated the federal proposal.

Ten blocks between I-90 to the east and King Street to the west. 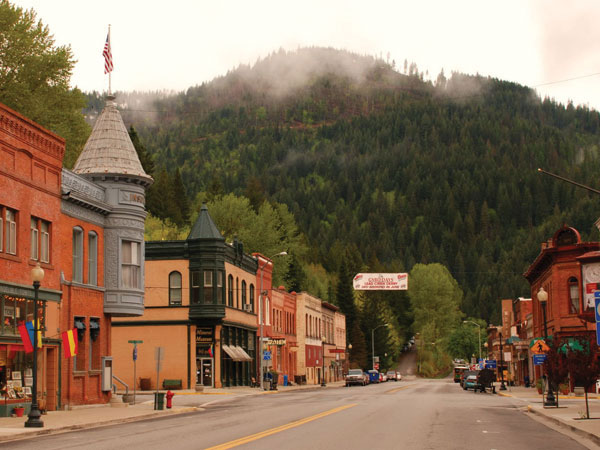 The proximity of the Panhandle National Forest creates a picturesque backdrop for Bank Street's historic buildings, rebuilt twice after devastating forest fires around the turn of the century. It is not uncommon for pedestrians to see elk or deer grazing in the hillsides. Photo courtesy of Scott Lasley.

Just as compelling as its history are the magnificent views Bank Street affords of the surrounding Panhandle National Forest. Hillsides press so close it is not uncommon for pedestrians to see grazing elk or deer. Unbroken rows of three-story, brick Queen Anne architecture line both sides of the street, forming a perfect foreground to the picturesque mountains. Just a few hundred yards from Bank Street is the Trail of the Coeur d'Alenes, an abandoned Union Pacific right-of-way that hikers and bikers now use to reach the surrounding wilderness.

The town's mining culture still resonates strongly along Bank Street. Settled at the end of the 19th century, Wallace became one of the country's most prosperous silver mining towns and the heart of the "Silver Valley" almost overnight. Ore carts from the mines are now used as outdoor flower pots by many of the businesses along the street, while old style trolleys take visitors on narrated tours around Wallace and to a nearby silver mine for an underground walk guided by retired miners. 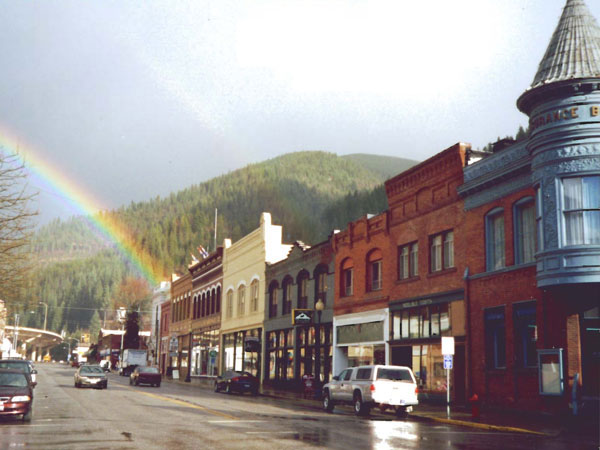 Wallace citizens defeated a federal proposal to transform Bank Street to a six-lane highway to accommodate I-90 traffic. Seen in the distance, I-90 is routed on an overpass at the east end of the street. Photo courtesy of Shauna Hillman.

I-90 Litigation and Overhead Bypass 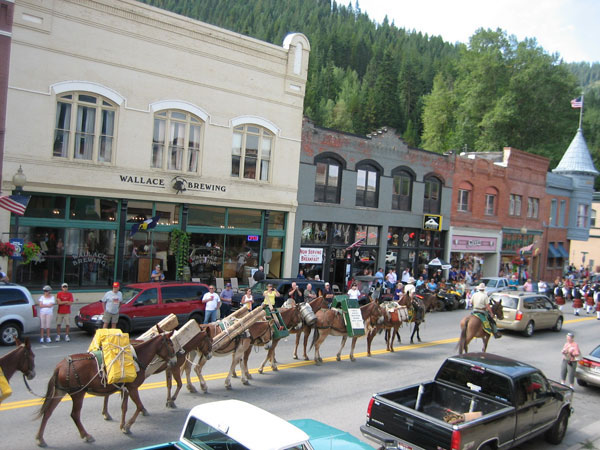 A U.S. Forest Service procession of mules makes its way down Bank Street during the 1910 Fire Commemoration parade prepared to fight forest fires as they did 100 years ago. Photo courtesy of Dean Cooper.